The design and construction of a Big Yellow self storage facility with associated external works including extensive public realm improvements and soft landscaping.

The works comprised of the construction of a new self-storage facility on a brownfield site. The new construction included reinforced concrete piled foundations with ring/tie beams and a steel framed structure with a concrete soffit over-croft to the ground floor set over five floors.

The main perimeter facades of the structure were clad in a combination of Equitone rainscreen and Corten steel cladding with glazed curtain walling.

There were mixed hard/soft landscaped zones to the South, West and North elevations with hardstandings to the inner yard and Eastern elevations.

The contract works were to construct the main build shell, with external works and services. A separate fit-out contract followed at Practical Completion, direct by the Client with their framework fit-out contractors.

The site was bounded by an existing Network Rail bridge structure, carrying electrified overhead power cables. Specific requirements and conditions were applied by Network Rail both prior to and throughout the course of all construction activities, with particular focus on vibration monitoring, craneage & non-permissible over sailing of the lines, crane and scaffolding collapse potential & mitigation.

Network Rail were involved at all stages, including liaison meetings on site, to ensure compliance with their procedures and requirements. The chosen methodology was conveyed to all associated subcontractors and monitored by Triton’s site management team.

Steel frame design was completed with column sections adjacent to the Railway and erected in three phases to ensure they did not reach the asset, even in the event of collapse during erection.

The Client encountered lengthy delays with the Planners throughout the contract due to the late approval of bespoke façade materials, as the building is on the edge of a sensitive conservation area.

Early access to commence Fitting out works was agreed and granted to the Client to allow commencement of their fit-out works ahead of the contract completion date. This enabled the store to open for trading on time in May 2019.

WHITEHALL ROAD
This scheme comprised of construction of 3 large high spec Industrial units and remediation of a former chemical plant within each unit offices were also included.Installation of 2 no bridges. Works also including the construction of access roads through the whole site.278 works to form new access from main road. Landscaping works to whole site… 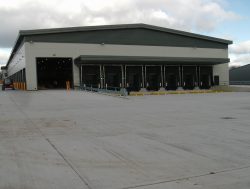 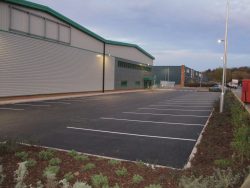 PARKWOOD INDUSTRIAL ESTATE – SHEFFIELD
Work has been completed  on a new warehouse scheme on the Parkwood Industrial Estate in Sheffield. The scheme comprised of a design and construction for a Warehouse/trade counter unit together with associated external works, drainage and services. A 19 space car park and small refurbishment works for a further 3 units on the estate was…