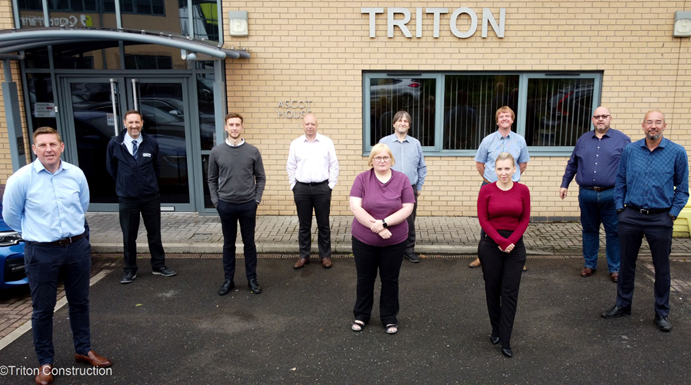 Triton Construction has announced the recruitment of eight new team members as it pursues ambitious plans to expand its North West regional presence and increase turnover by around 30% over the next financial year.

Despite the pandemic and subsequent requirement to scale back growth, Triton has enjoyed a series of major project wins in recent months with a healthy order book and pipeline that dictates a target turnover of around £25 million for the North West office for the current financial year.  These include a further new build project for self-storage business, SureStore, the second phase of Mersey Reach for Chancerygate, Bolton Muslim Girls School,  King David High School also 2 new build Hotels in Wales for Premier Inn.

The existing team of eight has now expanded to 16 as Triton builds its regional expertise to support business growth.

Andrew Gaskell, formally with CPSUK, and Jovan Ristov, who had a long career at Henry Boot, have joined as Contracts Managers, both bringing considerable experience in managing multi-million-pound projects.

“I am delighted to be able to announce great plans for our North West operation despite the uncertainty that the pandemic has caused over the last 15 months.  We remain cautious but confident as our reputation in the North West continues to grow and we are pleased to have attracted some of the region’s best talent to help take that forward. “With high profile projects including the refurbishment of the iconic Royal Liver Building in Liverpool and the radical new Big Yellow self-storage building in Manchester, we have set the benchmark for what is to come and look forward to building the business across the region in the future with a fantastic team.”

Triton Construction is a £50 million turnover company providing design and build, civils, fit out and refurbishment services.  Established for more than 16 years it employs over 80 people across its offices in the North West and Yorkshire.

Paul Clarkson, Managing Director at Triton Construction, said, “Having ridden out a number of economic challenges in recent years, we have adjusted the business model to become more resilient, robust and competitive.  I am pleased to see our North West operation expand to now operate virtually independent of our HQ with much headroom for profitable growth in the future.”

Other project highlights for Triton in the last 12 months include a new testing facility for British institution and gear engine pioneer David Brown Santasalo, a £6 million refurbishment for the Liver Building in Liverpool, a £6.2 million, and a new warehouse facility for Tech Folien in Liverpool.